FluoTags are camelid single domain antibodies consisting only of one antigen binding site of a Alpaka heavy chain antibody. With only ~15 kDa, these Tags are about 10-times smaller than conventional IgG antibody molecules. 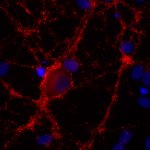 ICC
Background
Protocols
Other products for this target